THE DIGITECH HUB OF AFRICA

Welcome to a wealth of opportunities in Africa’s DigiTech hub

Cape Town is the undisputed DigiTech hub of Africa and a leading location for technology start-ups, venture capital deals and software companies. The city of Cape Town, including Stellenbosch, is now home to approximately 550 entrepreneurial enterprises that work in software development, e-commerce, information technology and many other DigiTech sectors.

In fact, the Cape Town DigiTech industry employs between 40–50 000 people. This is significantly more than the tech sectors in Lagos and Nairobi, which employ 9000 and 7000 people respectively (Evaluation and Network Analysis of the Cape Town-Stellenbosch Tech Sector Report, 2018).

This part of South Africa also boasts the privilege of being home to the headquarters of global internet giant, Naspers. As Africa’s highest-valued tech company, it is a massive tech investor on an international scale buying into companies like Tencent and many others. 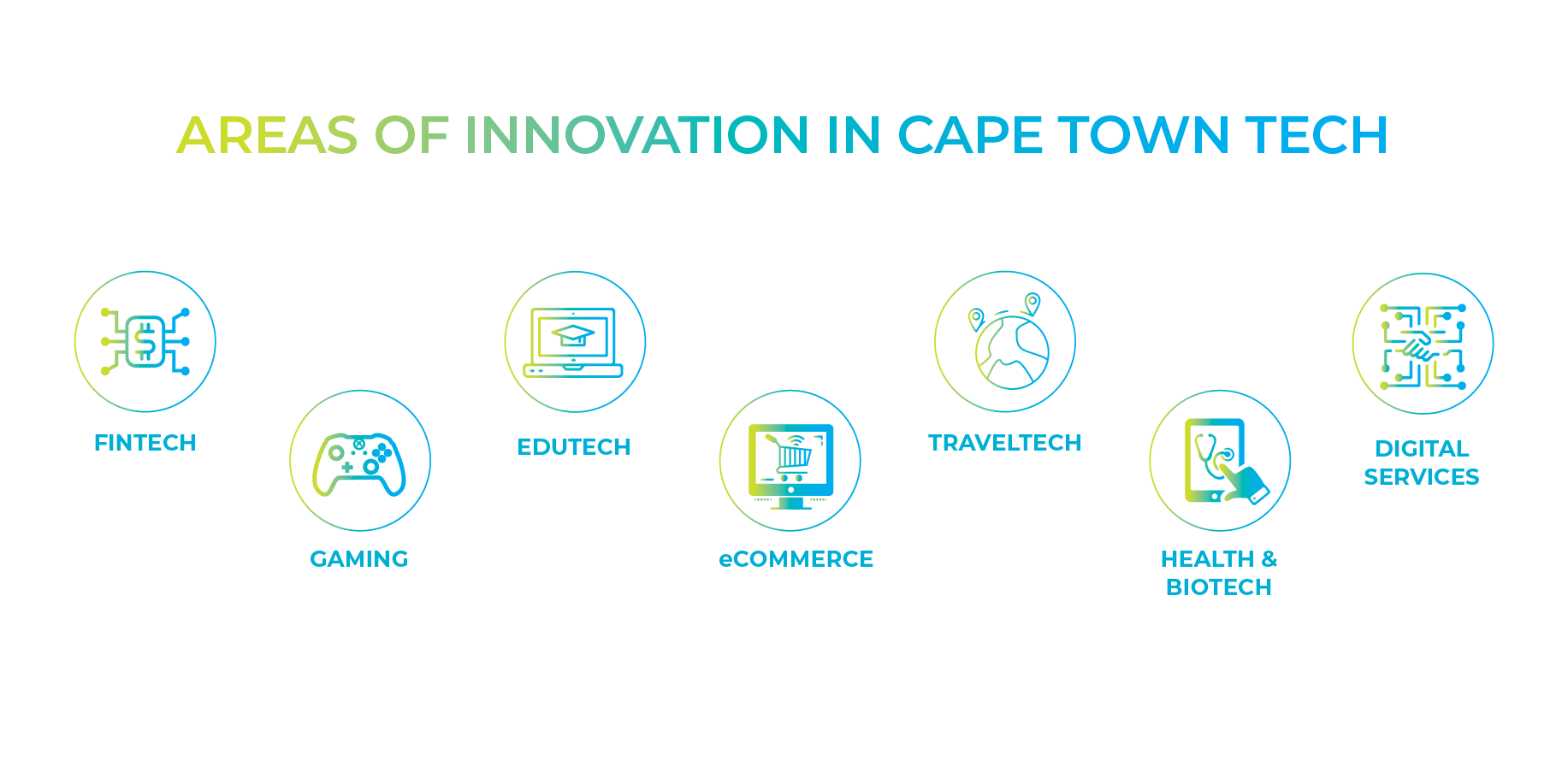 The DigiTech Ecosystem in Cape Town

It’s interesting to note that Cape Town does actually have fewer DigiTech companies, including fewer software start-ups, when compared to either Nairobi or Lagos. However, even with fewer enterprises, the entrepreneurial and DigiTech ecosystems here have worked in hand-in-hand to accelerate meaningful job creation in Cape Town. Companies in the city generate an objectively higher level of productivity than their African counterparts combined.

The dynamism, productivity and high-impact companies of Cape Town’s information technology sector make it stand out as one of the most successful models in Sub-Saharan Africa. Competitive advantages in this industry include:

Competitive advantages of Cape Town as an IT location 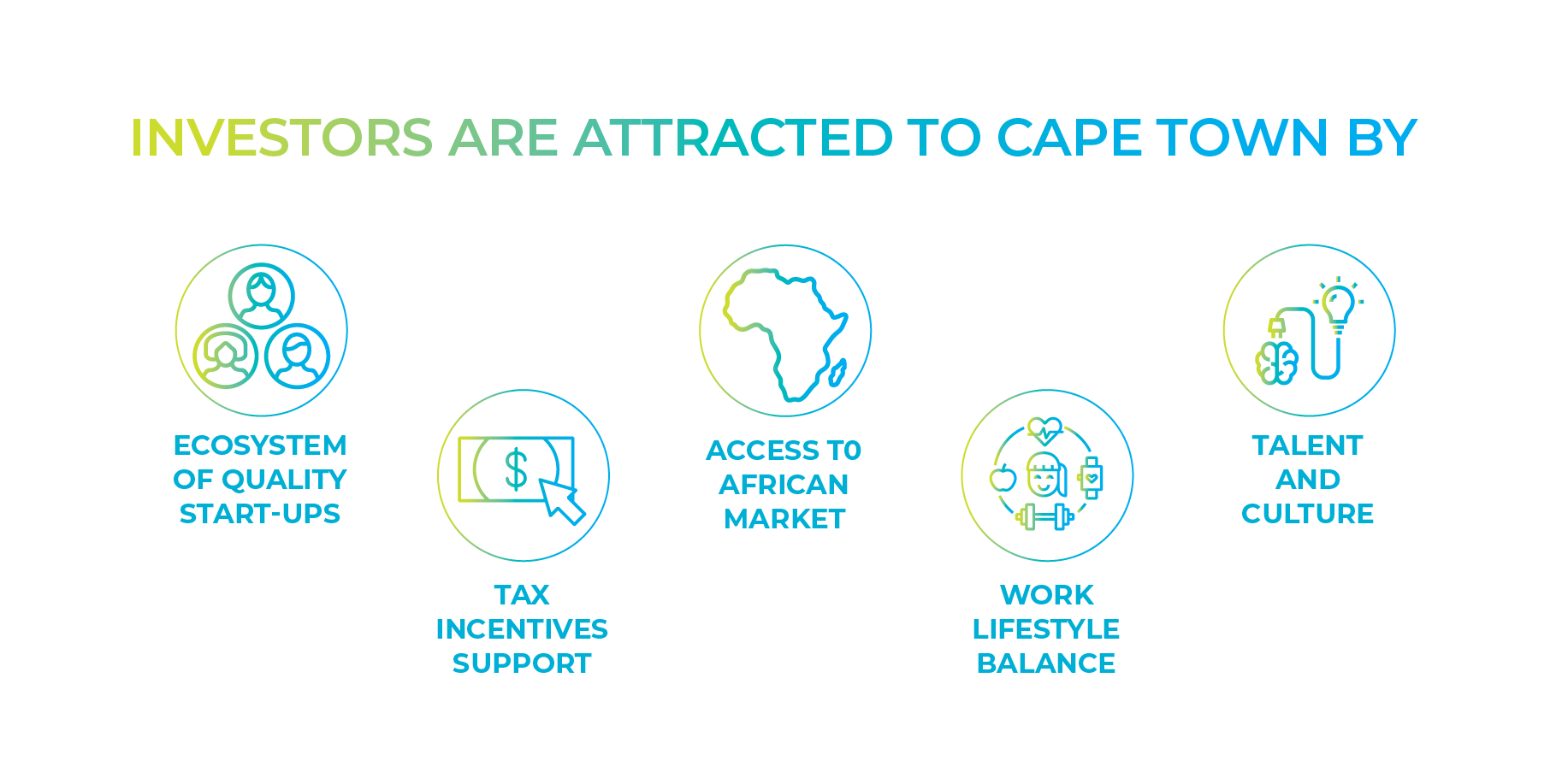 Besides the wonderful interconnectedness of the Cape’s entrepreneurs in regards to mentorship, investment, employment and inspiration, there is an already established culture of venture funding here. This makes engaging with enterprises in the city, from an investor’s point of view, a seamless and enjoyable experience.

“Roughly one-third of the companies in [Cape Town] have received some form of angel investment or venture funding. This number is higher on average than the rates in comparable cities like Lagos, Nairobi, and Johannesburg,” (Endeavor 2019).

Cape Town is the ideal launchpad into the South African, as well as African, ever-growing digital and technological industries. The ongoing advancement of Information Technology infrastructure and innovative software developments have allowed the e-commerce industry to grow at a rapid pace here. This will continue to reach greater heights. Future opportunities also include:

There are a number of multi-national enterprises that have acknowledged the Cape as the tech capital of Africa by setting up operations here. After all, this is a place of innovation and future-forward thinking. These hugely successful brands include:

The Cape of Great Opportunity

In summary, Cape Town truly is an inspiring place for investors and entrepreneurs to network. It’s perceived as a tech hub and is delivering year after year with growth and innovation. The local tech community is vibrant and enthusiastic with a large network of start-up support. The city and surrounds offer a globally competitive lifestyle that embraces recreation and natural splendour. In turn, this has led to a wealth of energetic talent being attracted to the city.

Why Cape Town? Many would argue why not. It’s a true drawing card for almost any DigiTech investment in South Africa.

Contact us for more information on investing in Cape Town’s Digitech sector.

For more information and for opportunities in the Digitech sector, get in touch: