Last week, I got to visit a new office space for Teleperformance, one of the biggest BPO companies in the world.

The Observatory site currently boasts 1 500 staff servicing four clients from the United Kingdom. By the end of the year, that will expand to 2 500 employees managing client companies in the UK and United States.

Together with domestic-facing clients, more than 70 000 people now work in the sector in Cape Town. Last year, the international BPO market in Cape Town contributed around R14 billion to the metro’s economy. 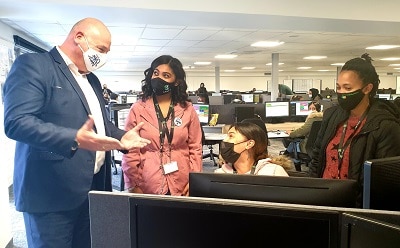 South Africa has fast become one of the most favoured locations internationally for BPO companies. For the second consecutive year, 700 executives from the demand markets of Australia, Canada, France, Germany, Italy, Spain, the UK, and the USA gave South Africa the accolade of being “the most favoured offshore CX delivery location in 2022” in the annual Ryan Strategic Advisory Front Office BPO Omnibus Survey.

Cape Town and the Western Cape continue to be the most sought after locations for offshore CX delivery in the country and in the past year has improved its market share to 65% of all delivery in South Africa.

This rapid expansion of business in Cape Town’s call centre market is a testament to the City’s investment into skills development and job placements in its high growth industries.

To date, almost 1 500 unemployed and previously disadvantaged individuals have been trained for call centres and each one of them has been offered permanent employment upon successful completion of their training.

These newly upskilled Capetonians now work across call centres in and around the metro.

Realising the potential of Cape Town’s high growth industries will further boost the local economy and extend job opportunities to even more Capetonians. This has been my goal since stepping into this Mayoral Committee position three years ago. Through our programmes and partnerships, we are achieving that goal.