LOCAL SODA BRAND PURA BEVERAGES TAKES THE US BY STORM

Post-COVID, CEO Greig Jansen hopped on the first available flight out of Cape Town determined to get his product on shelves in the United States (US), the world’s biggest beverage market. Then, he realised his dream.

In a single day, the trailblazing company made more than US$1-million worth of sales, captivating US retailers, including the likes of Walmart, Target, Whole Foods and Costco.

But how? Proper planning and the right mind-set, says Jansen.

This audacious business has been making local and international waves since its launch in 2015 and currently exports to 14 countries across the globe, including the US, United Arab Emirates (UAE), Australia and the United Kingdom (UK).

With the philosophy that everyone should try to ‘live a little PURA’, the PURA Beverages team believes that if you are in a position to make a difference, then you should.

“No grand gestures, just small things that people can all do every day to make the world a better place,” reads a note on the company website.

PURA Beverages currently boasts three ranges of products in its stable, including PURA Soda and PURA Kids which are both a little healthier – with just a sprinkle of sugar, all-natural flavours and zero colourants, and do not compromise on taste and refreshment.

The company first attempted to launch its ‘better-for-you’ brand in the US in 2019, but then COVID hit.

“We couldn’t travel and couldn’t get hold of anyone,” says Jansen. “So when the airways opened up again, we jumped onto a plane to lay the groundwork ahead of two of the biggest food and beverage sector trade shows in the US, Summer Fancy Foods in New York and the Kehe Holiday Show in Chicago. Visiting these trade shows gave us direct access to all the major retailers.”

Before the shows though, the company had to ensure that it was properly set up in the US.

“We had to do our homework. Proper planning and going in with the right mind-set was critical,” Jansen says. “We now have an entity, a back office, and a stock warehouse, all based on the ground in the US. It meant we were now ready to meet the right people to get our product into the hands of consumers, but more importantly, be able to follow through afterward. Effectively, we’re credible. When you’re in the US, you’ve got to decide whether you’re in or out – you cannot dip your toes in the water. We have certainly put both feet in.”

As a result, PURA Beverages secured US$1 million (R17 million) in orders at the Chicago show, and is due to launch its products on the shelves of Target, one of the largest retailers in the US, in 2023.

“The Kehe show was amazing. It was quite a unique concept,” relates Jansen.

“They invite the top 2 000 suppliers, and then anything new and interesting. We fitted into the new and interesting category. Effectively, the big retailers are at the show. They walk around and lick, sniff and taste the product, ask you questions about the product, and place orders then and right there which is quite a different concept to what we have here. That’s essentially where we picked up all the initial orders, and we’re basically looking at the follow-up orders coming through.”

According to Jansen, the US has the biggest beverage market in the world, with the ‘better-for-you’ drinks category growing by 34% last year. “Therefore, we knew that it was imperative for us to get in on the action.”

Having achieved an honours degree in Science, a post graduate in Business Finance and Management, and an MBA in Strategic Finance from the University of KwaZulu-Natal, Jansen entered the FMCG space in 2000 as a technologist in a buying category for Woolworths.

Since then, he has held a number of high-profile positions both locally and abroad, including over five years as the CEO for Coca Cola’s East Africa Bottling Share Company in Africa, and two years as the CEO of SGK Commodities, based in Switzerland.

Thereafter, he became the CEO of PURA, where his passion for building relationships and creating brands with purpose has been instrumental in the beverage’s success. 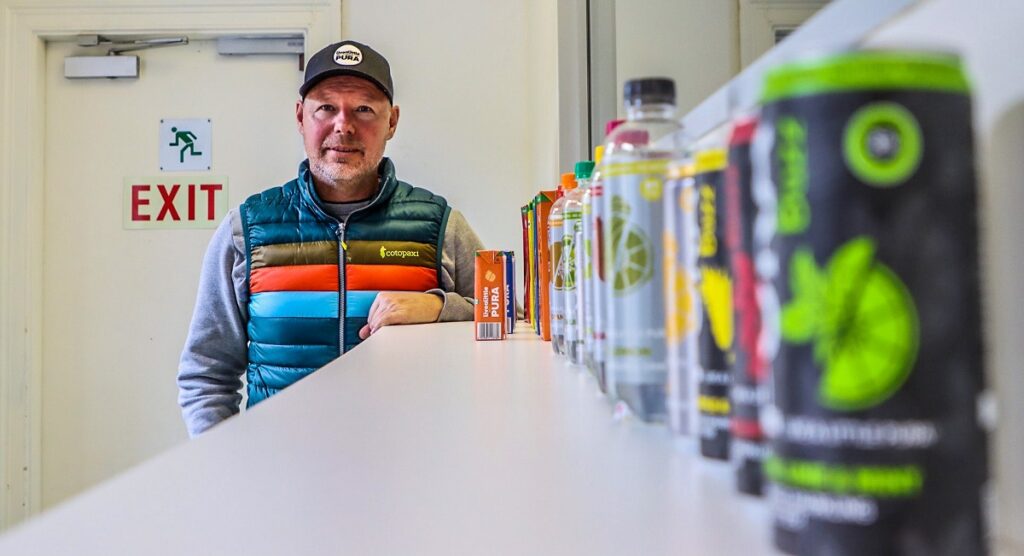 “The initial PURA Beverages concept came to me in Mexico. I was still at Coke at the time,” recalls Jansen.

“Mexico is the biggest market for Coke in the world. Literally, that’s where I was thinking, is there a healthier alternative that still tastes great and is refreshing? That’s where the idea started, then I started working on it from there. The rest is history.”

PURA Beverages are manufactured in Cape Town and Johannesburg. “As the volumes increase, we’d look to have a continuance in the US, but want to keep manufacturing local for as long as we can,” says Jansen.

“In a small way, if we can contribute to the success of the economy in SA, that’s a very humbling thing to be able to say and do.”

About living in Cape Town and operating the business from the city, Jansen says: “I don’t think there’s a better city in the world in terms of amazing people, and what Cape Town offers in terms of lifestyle.”

Because Cape Town is such an amazing destination, we never have a problem telling people, well listen, let’s get together in Cape Town and discuss this face-to-face.

South Africa is PURA’s provenance market, says Jansen. “We’ll always be proudly South African and we want to grow here. That is first and foremost on the cards and we are seeing amazing traction coming through, in SA and the surrounding SADC going forward. The US in terms of bang for effort is the biggest beverage market, so we’ve put a lot of focus there. But we also are currently exporting to around 15 countries.”

According to Jansen, success in international markets would’ve been near impossible without the support of the Department of Trade, Industry and Competition (dtic) and the United States Agency for International Development (USAID).

The food and beverage sector is one of the biggest sub-categories within Cape Town’s manufacturing industry, contributing 3,6% of Cape Town’s gross value add and 4,1% of its formal employment. The industry contributes a substantial portion of the Cape’s export and destination profile.